The following article is from Bill Cowan and features some of his reminiscences from the early 1980’s as an OETT committee member and volunteer. If any other early OETT member would like to contribute an article from that period, please send it as an attachment to this email address...............admin@oett.nz ........... If accepted it will be published in this section of the website.

I became involved with the Trust in 1980 so cannot count myself as one of the original few but my memories of those early days may be of some interest to present-day members. Though we were all on a steep learning curve in the formative years it was also an exciting period as our train ventured to destinations new, capturing the interests and enthusiasms of both travellers and the community at large. I returned to Dunedin in May 1980 after spending the previous 22 years working in various Otago and Southland country schools. In Dunedin I looked forward to forging closer ties with the OETT which had run its first excursion train in the previous spring to Katiki. (Warning: these notes are being written strictly from memory and we all know how fallible that can be)! George Emerson was an early contact and he suggested I might like to take on the role of Secretary to the Trust. With some reluctance I agreed but after a year relinquished the position to Philip Kidd. In 1980 the Trust Committee consisted of about eight members and we met before tea in Jolyon Manning’s Otago Development Council’s Office in Princes Street about once a fortnight. Members included George (Chairman), Arthur Rockliff (Treasurer), self (Secretary), Robin Archer, John Chapman, Roger Stanton and Nan Ball. George ran a ‘tight ship’. All the Trust business was handled by this committee with George and Arthur the ‘action men.’ Arthur and George had skills which complemented each other so neatly: Arthur was the practical man who spoke and thought NZR lingo and procedure; George had the vision and leadership qualities. Both men loved trains. Only later was a sub-committee structure established with the first having responsibility for "operations".

Arthur was able to cut through NZR "bull" with relish. Early on the Trust received permission to lease a guard's van for a specified period, of about a year. Permission was also granted for the van to be painted in Trust colours. Towards the end of 1980 a letter was received from the NZR requesting the return of the van and it's re-painting in NZR colours. With an, "I'll deal with that", Arthur grabbed  the letter and we heard no more about the van's return. For all I know this vehicle is still in Trust colours and service. 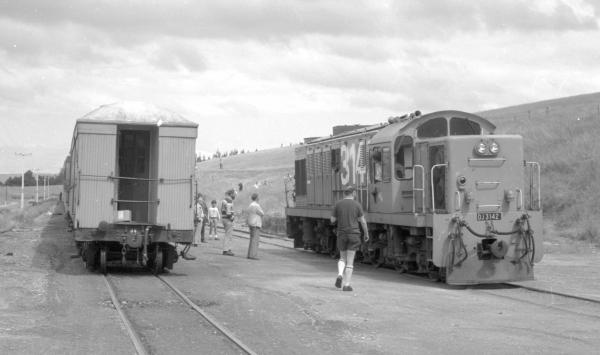 But these meetings and the subsequent writing up and distribution of minutes and attending to correspondence, etc. weren’t my only Trust involvement. There were Tuesday evenings at the old Reid and Gray plant at Burnside. For a couple of hours, a group of us beavered away rehabilitating seating for the wooden cars under restoration. During this time Jim Blakie was busy converting the buffet car which, in time, became not only a real money-spinner but was also a key feature of all subsequent excursions.

Those early excursions! What adventures! In those early years, and once an effective fleet of restored cars was established, the Trust’s motto could well have been: ‘Have Train, Will Travel’. In spite of a steadily shrinking rail network the OETT covered a lot of ground: Central Otago, the West Coast, Northland, Napier/Hastings, Kurow, Ohai, Makareao, even Cormacks on the abandoned Ngapara line. (see photo below) 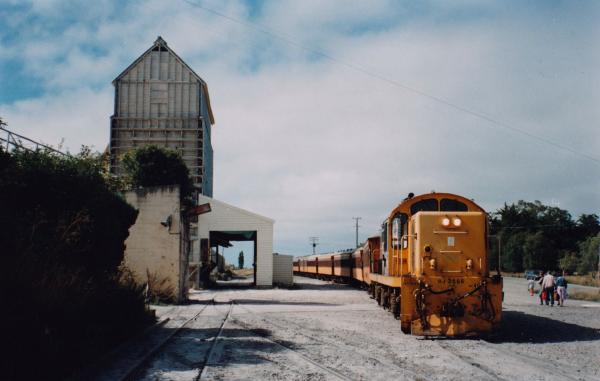 Naturally, visits of the OETT attracted much favourable publicity especially in those places which hadn’t hosted a passenger train for yonks. Ohai would come to a standstill Businesses would throw open their doors. And imagine the pride felt by the Otagoites as they took ‘their’ train into those parts of the country foreign to many of us. (Somewhere there is a diary written-up by the late Ruby Bambery about that remarkable Young Farmers’ Trip from Invercargill to the Far North). 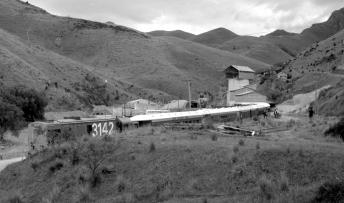 Names of those early train volunteers who helped to make things happen flood back: The Rockliff Family, Ian Gamble and Ruth, Andy and Tina Arendonk, Stan Wooding, Bill Lloyd, Dave Aitken, my own family, Des and June Scott, John Chapman, Jim Harris, Harry Watt, Ben and Agnes Beatson , Bert and Betty Wolff, etc. etc. For a period, I had the job of organizing volunteers for these various excursions and very rarely was I let down. Folk were invariably keen to help and they took their duties seriously but there was never a dull moment. 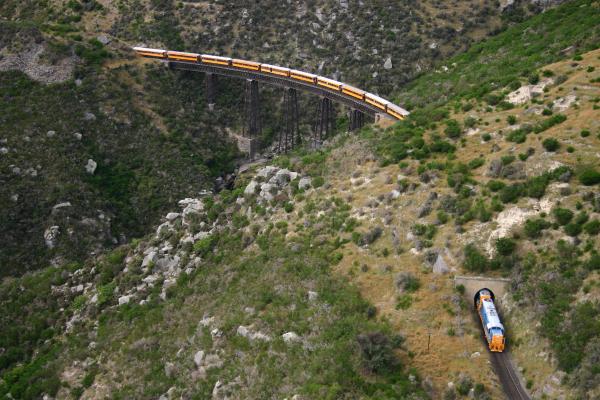 The Memories retain their Lustre: 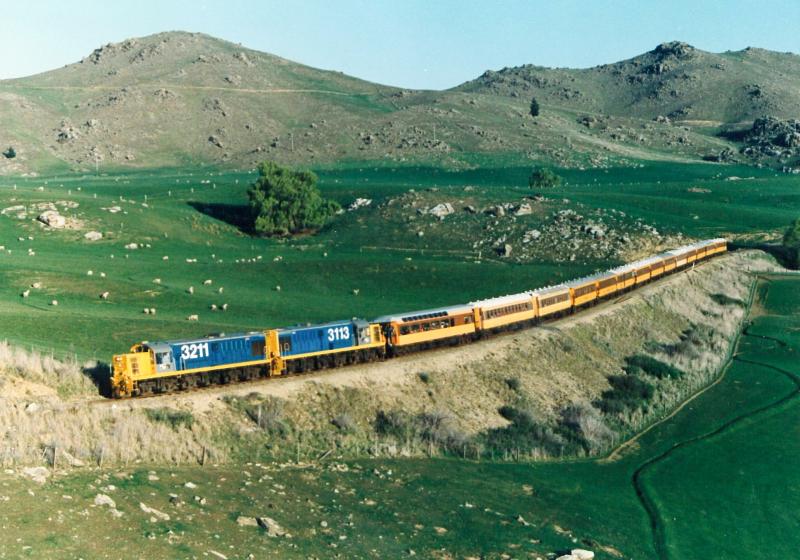 *Another motto for the Trust in those formative years could read: ‘Just in Time’. There were occasions when ‘things’ came together at the last minute. In the final, few hours before the operation of the very first Taieri Gorge Ltd Jack Watson and helper were still fitting a bogie king-pin cover in the newly-built observation car. In the final hour or so before passengers boarded the Great Scout Expedition to the North Island Arthur was brazing-up some pipe work under the Buffet Car.

*The train is returning from an excursion to Clyde and climbing Tiger Hill with the setting-sun slanting through into a ‘service’ car. The troops have to be fed and the volunteers are using the swing-over seat backs as tables on which to butter bread.

*The unflappable Ian Gamble. With Ian aboard you were guaranteed of a trouble-free trip. Ian was a master at dealing with miss-behaving toilets and any other mechanical or electrical problem which might arise. Otherwise he would be found in the buffet car dispensing scones, soup and wisdom in equal quantities.

*The School train and weed-spray. Every couple of years I would organize an outing up the Gorge for Fairfield School and any other schools interested. We would stop over for a couple of hours or so at Hindon and use the picnic area to kick and hit balls around WITH NO SWIMMING ALLOWED! Usually it was a pleasant and stress-free outing. Not on one outing however: with absolutely lousy timing our train arrived at Hindon about half an hour after a weed spraying outfit had begun spraying weed-killer over our picnic area!

* Dick Skinner’s stories particularly the one about the circus elephant at Riversdale.

*Overall, the good humour of passengers, volunteers and NZR crew.  It was a great case of train management and OETT staff working together harmoniously towards a common goal: promoting the pleasures of train travel. Stevenson was right: the journey itself is as important as the destination.

*Hosting school parties on the train and watching the reaction as we crossed the viaducts and negotiated the tunnels. Even thirty years ago, few children had travelled by train and a trip up the Gorge was a real novelty.

*The Ohai Railway Board’s little yellow diesels having a real struggle lifting the OETT train out of Ohai in Spring 1986.

*Les Box’s gang of clowns enlivening proceedings and leading the carol singing on the annual Santa train accompanied by Ruby Bambery on her accordion.

*The trip to Pukerangi to view Halley’s Comet courtesy of the local Astronomers’ Group who had set up telescopes. Alas the night was overcast and Halley remained shrouded. But who can forget that train passage through the Gorge where the locomotive’s headlights picked – out all those fantastic shapes; talk about a trip with a difference.

*Jim Harris, on a Friday evening and prior to a Saturday excursion, pulling up on the main platform beside our train in his blue Mk 3 Zephyr loaded to the gunwales with stocks for the buffet car. The old Zephyr was chock-a-block full of supplies such as chocolate bars, lollies, gum, Twinky Bars, drinks, ice creams, you name it, Jim had it. He and Harry Watts would then set-to and stow all the stuff aboard the car which, at that time, also housed the diesel engine and generator which supplied electricity to the train for lighting, heating and refrigeration purposes.

These memories have only scratched the surface. There is a book waiting to be written on the history and operations of the OETT, TGR and Dunedin Railways and it will not be a slim volume. Do we really appreciate what a remarkable venture was established all those years ago? But there is an urgency for this to be started before too many of us take that journey to the place where the trains are always on time, where the engines burn coal and where the Buffet Cars never run short of Twinky Bars.

Contributed by Bill Cowan; April 2016.  P.S. I would dearly like some of the ‘old timers’ to contribute their memories even if it is just to amplify or correct what I have written.

The train that was run to publicise the re-launch of Monteiths Beer a former  Westcoast Brand. Here we see it skirting around Otago Harbour on it's way to Dunedin. The locomotive Roger's K88 is preserved at Tinwald, Ashburton. 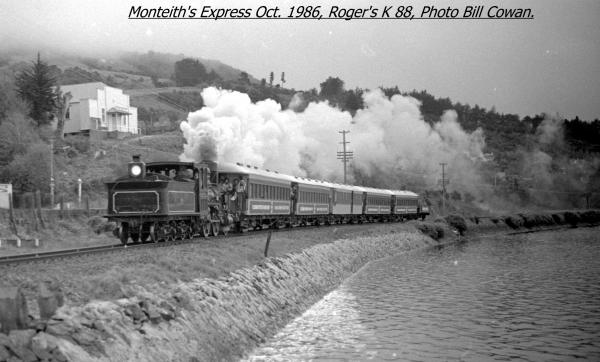 The OETT wishes to acknowledge Bill Cowan for his article/photographs and Paul Jeffery, Ken Devlin and John Murray for their photographs reproduced here.