The Trust was formed in April 1978 primarily to operate excursions on the Otago Central Railway line The first OETT chartered train ran in October 1979.

Prior to 1976 the Otago Branch of the New Zealand Railway and Locomotive Society (NZRLS) had run a number of popular excursions, among them being, to destinations on the Otago Central Line, Kingston at the southern end of Lake Wakatipu, and the Bluff line to visit Stewart Island. This had built on the former very popular New Zealand Railways Department (NZR) excursions from Dunedin to destinations such as the spring daffodils at Lawrence and to Mt. Stuart Reserve for picnic trains on the now closed Roxburgh Branch Railway, which meant that the Dunedin public had a tradition of supporting excursion trains. However, the NZR decided in 1976 that it would no longer operate excursion trains or hire carriages for other organisations to run trains due to the lack of carriages. This was followed by the demise of the Dunedin suburban rail system.

Two very important events happened around the period 1976 to 1978, as a result of the decisions made by NZR, they were:

This lead to the Otago Branch of NZRLS purchasing a number of redundant wooden carriages from NZR. The condition of these carriages ranged from reasonable to derelict, in this latter group being car "J". At a committee meeting of the NZRLS Otago Branch in 1978 it was resolved to form a new incorporated society to be called the “Otago Excursion Train Trust” (OETT), to take over carriage rebuilding and operate the resulting excursion train. The Trust was inaugurated at a public meeting in Dunedin in April 1978 and operated its first excursion from Dunedin to Cromwell in October 1979. There was an unofficial run earlier with a couple of carriages attached to a freight train to Palmerston in September 1979.

The overhaul of carriages was an arduous task for OETT volunteers and was made even harder by the fact that some of the carriages were minus doors windows and seats as well as rotten wood work. Undaunted an enthusiastic band of members scraped of the layers of years of paint and dirt, replaced most of the woodwork, made new doors and windows, upholstered seats and installed toilets and new electrical wiring and fittings. The Bayfield JCs financed and assisted in the overhaul of the previously mentioned car "J".

Over the next few years additional carriages were purchased and refurbished and in 1986 over the four-month summer period some 11 000 passengers were taken to destinations such as Oamaru, Clyde, Kurow, Invercargill and Bluff. With this experience in hand more long distance excursions were run to the West Coast Seddonville 2 trips and Western Southland. There were two notable and ambitious trains run during this period a Boy Scout train to the Hawke’s Bay January 1981 Jamboree, the train crossing Cook Strait on the night of New Year’s Eve 31st of December 1980.The train was based in Hastings for a week and ran public excursions which were heavily patronised. 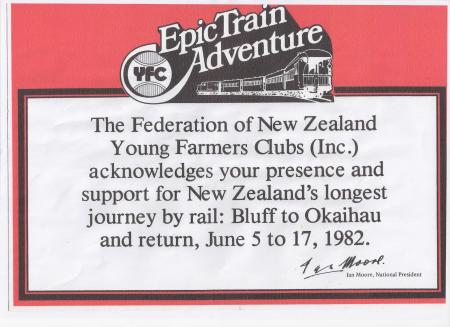 Then in June 1982 a Young Farmers Club trip was run from Bluff in the south to Okaihou in the North, again crossing Cook Strait. The crews on all these trains apart from NZR operating crews were volunteers. The volunteers handled everything from luggage, train provisioning, train cleaning and running a very busy buffet car.

A first day cover was produced by the Young Farmers  as a fund raising venture for charity. It featured the dates of the trip, Post Office stamps from Bluff and Okaihau and a 30 cent stamp of the Dunedin Railway Station. 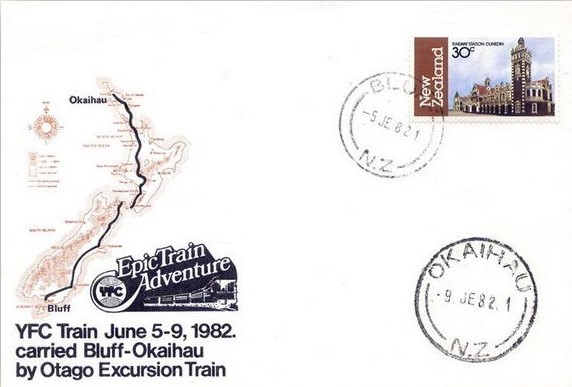 The demand for a regular train in the Taieri Gorge for visitors to Dunedin to see this fascinating piece of country caused a major re-think of the Trusts activities and in 1986 planning for a regular train service was begun. This involved the building of a snack bar car and upgrading of some of the existing wooden carriages. The snack bar car was a first in many ways i.e. air conditioned, large panoramic windows and all steel constructed body. On the 21st February 1987 the first run of the Taieri Gorge Limited (TGL) to Pukerangi took place. It was officially sent on its way by the then Minister of Railways Richard Prebble.

In 1989 the New Zealand Railways Corporation (NZRC) announced the closure of the Otago Central Railway line beyond the Taieri sidings owing to a lack of freight traffic following the completion of the Clyde Dam. The Dunedin City Council then stepped in, purchasing the lease of the formation, tunnels and bridges from the 3.5 kilometre peg to Middlemarch in 1990, which it then leased to the OETT to run passenger trains. The OETT continued to operate the Taieri Gorge Limited, now with its own locomotives (DJ class locomotives withdrawn by NZR in the same year) and paid staff but it needed a further $1m to fund its operations. A community appeal was launched by the OETT utilizing its volunteer membership in part to, raise $1.2m.

In the mid-nineties the OETT Committee began to look for better ways of running the business rather than under the auspices of a Charitable Trust. Discussions were held with the Dunedin City Council about the future of the TGL. On 8 March 1995 the Dunedin City Council (through its holding company Dunedin City Holdings Limited) and the Trust incorporated a new company, Taieri Gorge Railway Limited. Dunedin City Holdings had a majority of shares (72.03%) and the Trust holds the balance of the shares (27.97%). The company operates as a Council Controlled Organisation (formerly known as a Local Authority Trading Enterprise) under Part 5 of the Local Government Act 2002. This put the whole operation on a better footing especially with the need to raise more capital to finance expansion of the business. Dunedin City Council then sold the chattels to the new company, and the Trust transferred its staff and sold its locomotives, carriages and other assets to the new company.

Volunteers have always been the main stay of the OETT not only working on trains, but also their efforts during the “Save the Train Appeal”, the rehabilitation of carriages and one other area of volunteer activity, now long since forgotten, but it needs to be mentioned here. Hours and hours of work at weekends were put in by 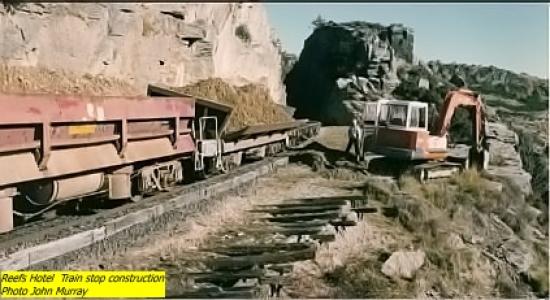 OETT volunteers building stopping places in the gorge to allow passengers to alight from a train and enjoy the wilderness experience. These stopping places were considered vital by the OETT for the success of the TGL It was able to be put this in place after the 1990-line purchase lease. The stopping places built were:

Using volunteer work parties, a volunteer locomotive driver, a volunteer digger driver and YD dump wagons hired from the NZRC these stopping places were able to be built from scratch or improved from what was there. The material was sourced from near Middlemarch and work trains were run from there to the various sites. The digger was provided as part of the “Save the Train Appeal” by Hirequip Dunedin. These were all completed prior to the Company taking over. Other potential stopping places had been identified and marked for future work at the time of the takeover. The volunteers were prepared to carry on, the machine was available but the offer wasn’t taken up.

In addition to the above, volunteer work parties installed two crossing loops. One at Parera and the other at North Taieri. The photo below features the re-installation of Parera, the old NZR had removed the original loop after Parera station was closed. North Taieri was a new loop, none existed there in NZR days. The late Ray Meek a former Otago Central Line ganger who was contracted to supervise the OETT's track gang on a part time basis was heard to say during the installation of the Parera loop: "I've been here too long. I pulled the loop out and now I am putting it back in again!" 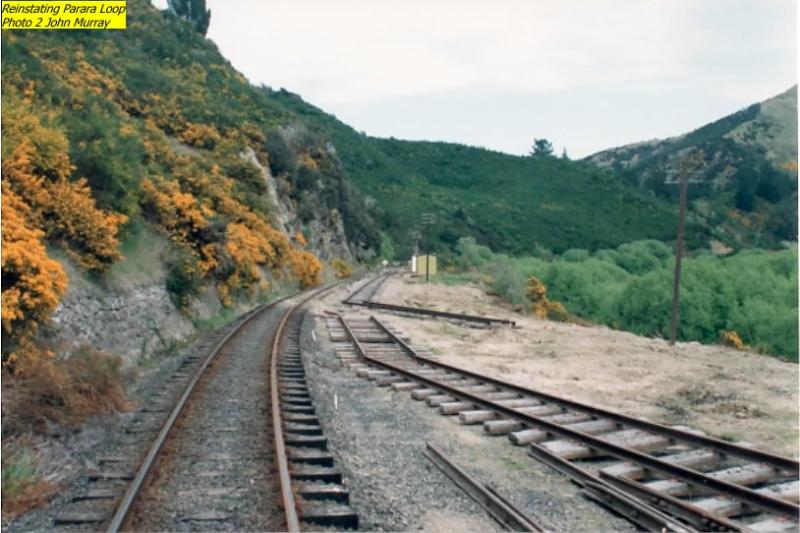 There was a proposal to reinstate the crossing siding at Flat Stream.  Unfortunately, the Company when it took over did not proceed with this, as it would save a lot of train delays on "Cruise Ship Train" days, allowing those trains to cross the scheduled morning TGL at Flat Stream rather than Pukerangi.

Today at the time of writing this, volunteers work on Cruise Ship trains and the odd excursion train. Their work is vital to the Company and OETT volunteers are much valued by the Company. If you wish to become a volunteer, like interacting with people and would like to be a part of the OETT's team of volunteers check out the links below.  Applications from people who don’t wish to be volunteers are equally welcome. All members of the OETT are entitled to discounted fares on all Dunedin Railway services upon presentation of a membership card.

Following the closedown of Dunedin Railways due the Coronavirus outbreak in March 2020 the role of the OETT has changed. Watch this space!