Leila died peacefully on Saturday March the 25th at Dunedin Hospital, surrounded by her family. Don her late husband, predeceased her in 2006 and is buried on a solitary site above the Hindon Road. The Grahams have run  the Ardachy Station at Hindon for many years. The first of the Graham family Murdoch, settled in Hindon in 1897.

When the OETT started operating trains through the Taieri Gorge to Middlemarch and Pukerangi following New Zealand Railways closure of the Otago Central Line from Middlemarch to Clyde there was much interaction between the Graham family and the OETT.  At least one prominent event, to which a special train was run, was held in the Grahams' old woolshed near the old homestead where Don gave visitors from the train a conducted tour featuring old farm machinery etc. and Leila provided a great afternoon tea. Don also played the part of Santa Clause for many years meeting the Trust's Santa train at Hindon after riding along the road across the river from the Station on horseback, with his helpers also on horseback, as the train arrived at Hindon Station, to the delight of the children on board..

Leila and her helpers Janet Dawson and Carolyn (Janet's friend) and sometimes Christine Graham, Leila's daughter in law were regulars on Cruise Ship trains selling fleeces and woollen goods to passengers. In latter years she was no longer on the Cruise Ship trains but always met the Cruise Ship trains when they stopped at Hindon Station with her woollen goods for sale. On most occasions Leila was accompanied by her old sheep dog Sue who in latter years was replaced by Tom the sheep dog and not to forget the little Jack Russel, Matilda. At times she had lambs there also plus other animals, a real menagerie.  The lambs were of much interest to Asian tourists especially for the Chinese who loved getting their photo taken with the lambs.

At Leila's request she was privately cremated. However family and friends were invited to attend an informal sharing of memories at Outram Presbyterian Hall on Friday March the 31st. The OETT was well represented by a good turn out of present and past volunteers. 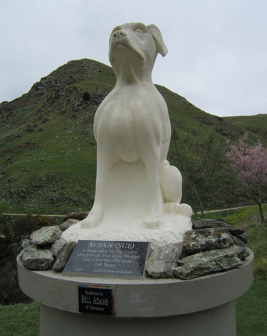 Leila and her old retired sheep dog the late Sue siting under the small veranda at Hindon Station will be an everlasting memory for many OETT volunteers and Dunedin Railways Staff. Sue's statue sits to this day at Hindon as a memorial to the sheep dogs of New Zealand.

Thank you Leila and your husband Don for all you did for the OETT in it's early days.

Posted 4 years ago by John Chapman