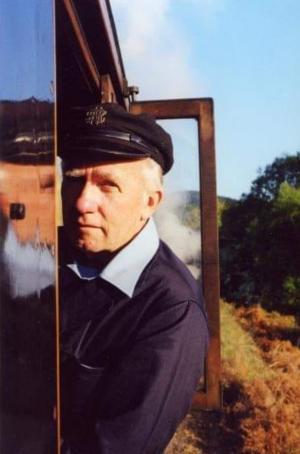 The  OETT wishes to inform our members of the death of Ron Butcher on August 25th 2019. Ron was a long time volunteer on Cruise Ship  trains along with his late wife Lorraine. He started work on the New Zealand Railways (NZR)  around about 1957 and eventually became a Locomotive Engineer (LE).  Latterly when he retired from the NZR  he  worked  as a LE with The Taieri Gorge Railway, now operating as Dunedin Railways.

The Trust  passes its condolences to his family

The Trust  thanks Benjamin Paul Jeffery for  the photo.

Here is a copy of Paul's comments which accompanied his photo of Ron from Facebook:

"In memory of Ron Butcher, former colleague Loco Engineer who passed away Sunday night. I crewed with Ron from June 1999 till he retired in late 2001, and on one or two work trains after that. Used to bring a bag of chips for the assistant.
This was one of my best portrait photos I've got, with Ron in his steam locomotive uniform (he started on railways around 1957)."

Photo:  Ron Butcher on Ab 663 while doing filming for a Lotto advertisement.

Posted 21 months ago by John Chapman